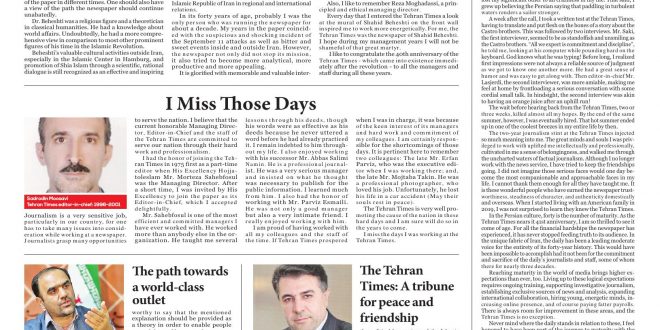 The Tehran Times: A tribune for peace and friendship

The Tehran Times has a special place among Iran’s visual, audio, and written media outlets. This newspaper, which was founded according to the idea of Martyr Dr. Beheshti, is a tribune that reflects clear and truthful news reports and analyses provided by a professional staff.

From this perspective, the Tehran Times has played an undeniable role in introducing and expanding Iran’s soft power through its comprehensive outlook. Everyone knows that Iran, with its ancient civilizational culture, has always been at the forefront of peace, friendship and fair relationship with states and nations throughout history. Such a view has been institutionalized in Iran’s culture and history, and this is exactly the same important and pivotal matter that some countries and foreign media outlets are trying to demonstrate upside down. Such countries and their affiliated media outlets are trying to depict Iran as a warlike country that seeks to disrupt stability and tranquility in the region. Given such an atmosphere, the Tehran Times, with its comprehensive outlook and introduction of Iran’s rich cultural and civilizational elements has been pushing for friendship among nations. It has been striving to show to the world that the Islamic Iran has always been a promoter of peace and friendship in international relations and is against any aggression and inequality. Through such an approach, the Tehran Times is a media outlet that makes use of Iran’s rich cultural elements. It is regarded as Iran’s cultural attaché and such achievement has come out of the tireless efforts by the editorial board of the Tehran Times, which continue uninterrupted.

Happy the fortieth anniversary of the Tehran Times.